With the anniversary of Brazen Sound Studios first year approaching, we have been reflecting on the vast range of bands and musicians we have had pass through our doors since May 2019.

We have provided rehearsal space in Exeter for bands of all sizes, genres and abilities since then. Created some great live recorded and synced audio videos for our clients as well as providing recording services both at the studio and on location. The importance of social content with visuals and audio is crucial in today’s world of instant impression making.

From acoustic singer songwriters and collaboration projects to brutal thrash metal, indie originals and lively pop. Here are just a small selection of artists whom we have had the pleasure of meeting at the studio.

Rews passed by to rehearse this year after finishing up supporting The Darkness on tour over the winter. With their musicians spread out in the South West, Brazen Sound Studios were in a great location for them all to come together to get started on rehearsing for their their 2nd album launch tour, coming soon in 2020.

Ben is an exceptional drummer and has performed with many artists on many stages. We were privileged to host his drum rehearsals at our studio in Exeter before he headed off to join Tom Walker who was headlining at NOS festival in Lisbon, Portugal.

Haytor are a lively pop/rock band from Exeter Devon who never fail to deliver a high energy performance. We have witnessed the awesome power of Austin on lead vocals, running through the crowds and wowing audiences with his smooth moves. Great melodies, catchy lyrics and some great musicianship makes for a great pop band.

The video for Sirens was recorded by Will Smith at Brazen Sound Studios before we had even finished building it! Enjoy the naked look of rehearsal room 1.

These guys are fantastic! The Primitive Noise Band have been regular attenders over the past year and most recently recorded a few LIVE videos with us at Brazen Sound Studios. Enhancing the release of their new album ‘Ghosts’. R&B originals with a great flavor.

They are one of those bands that you cant forget once heard. The energy from vocalist Becky Brine is infectious and you cannot help but tap your feet and get swinging when you hear them play.

The Primitive Noise Band will be playing at The Beehive, Honiton in May – supporting multi grammy award winning American country band ‘Asleep at the wheel’ for their 50th anniversary tour!

R&B favorites ‘Rush hour band’ are regular attenders of the studio. Playing their infectious and heady mix of blues and soul to make you move.

Lead vocalist Missy Marissa singing in sequins on her very own fur rug is just everything! Rush hour recorded their demos with us at Brazen Sound Studios. Not to be missed live, you are certain of a great night of bluesy brilliance.

ONE FOOT IN THE GROOVE – Party Band

8 piece party band One foot in the groove joined us for their rehearsals in the past year. A fantastic mix of soul, blues, funk and groovy singalong covers which are guaranteed to fill any dancefloor. Shelley from Brazen Sound studios has depped with the band on vocals (thats her up there in the video) whilst their usual singer, Jacqui, was away.

A great bunch of people and brilliant fun. Rehearsal room one is ideal for larger bands and can fit up to 12 musicians based on our 16 input mixing desk.

NOT SO RIGHTEOUS – POP PUNK ROCK

These post hardcore/pop punk rockers most recently were rehearsing with us for their gig at The Phoenix, Exeter. Energetic, lively and highly motivated. They made their mark on the newly opened studio and one of their trademark stickers graces the door of Room 2 paying homage to one of the first bands to cross our threshold.

The video taster above, features the boys in the studio, ensuring a tight performance.

Elwood and Will of Cranial Contamination needed a great space to rehearse for their summer festival tour in Europe.

These thrash metallers are from Bridgewater with their drummer based in Cornwall.

Brazen Sound Studios in Exeter offered them a great middle meeting space to get ready for their knockout performance at Deathfest in Germany (video above).

Scarlett Beats band are a local 80s themed band playing a wide range of covers from a huge range of artists – everything from The Bangles and Whitney to The Human League and soft cell. Currently using our rehearsal space to expand their set list for this years gigs.

Regular faces at Brazen Sound Studios are Seneca. In the midst of making their first recordings, these young musicians are gaining lots of popularity locally on the alt rock scene. Infectiously energetic, their sound alludes to Rage against the machine. Well worth catching one of their gigs. They are sure to be a force to be reckoned with.

GIVEN UP THE GHOST – Original rock

Rock band Given up the ghost are an originals band who frequent the studio writing and rehearsing. They always seem to have a lot of fun when they are in. ‘Bandana sunday’ should always be adhered to!

5 Piece energetic folk band, Tempest have been rehearsing with us recently and are currently crowdfunding for their first album. Having played a wide range of events, they are gaining much popularity and hoping to secure festival slots around the South West.

Composer, lyricist and musician Finn Rawlings (Piano) (along with lyricist Ophelia Pearce) has written some amazingly upbeat and rousing melodies. These are brought to life by musicians Cameron, Alex and Frank and vocals & guitar smashed by Ophelia who is an absolute powerhouse.

Ophelia originally joined us for our Brazen Sound Sessions back in May 2019 when we first opened our doors, the hallway wasn’t painted and we were still in the midst of decorating rehearsal room 2!

Ophelia recorded a handful of LIVE acoustic videos as part of a multi musician tribute to Martin ‘Superted’ Evans (Rivera FM) giving thanks to a man who had championed and supported live music in Devon.

Ophelia is an accomplished musician, lyricist and songwriter and one heck of a performer. We dubbed her ‘Janis Joplin
Incarnate’ however that is just a nod to the sense of power, soul and connection to Janis and certainly does not aim to
detract from the awesomeness of Ophelia herself.

Having had Ophelia in rehearsing her music along with her band, she is most definitely destined for greatness. We are big fans. Follow her journey. A smashing artist and a thoroughly lovely person too. Your world will be instantly enhanced by having heard her sing her heart out.

A great place to rehearse, record and make videos in Exeter!

This is just a small selection of our usual artists. There are many more new bands always passing through and collaborations always happening. #supportlivemusic

Brazen sound studios are based in Whitestone, Exeter – just a short 8 minute drive from central Exeter with excellent links to the A30 and M5 for surrounding areas such as Newton Abbott, Teignmouth, Okehampton and Dawlish.

We have had bands visit us from Bristol and London whilst passing through mid tour. Plenty of private parking on site, level load in and fully equipped spaces.

Book your band rehearsal in Exeter at www.brazensound.studio 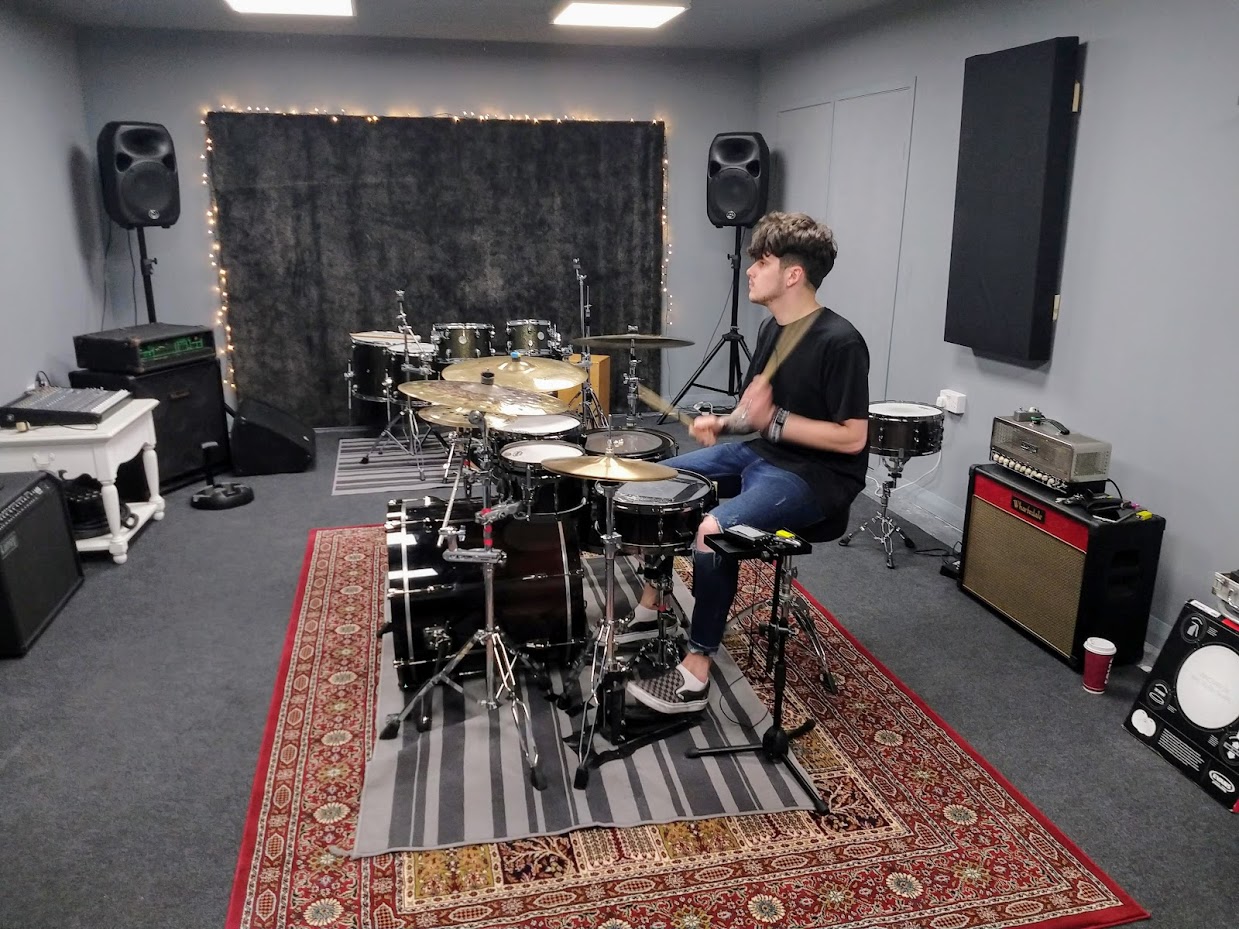 How to build a rehearsal studio with photo’s

Being involved in music is something we’ve always done. We’ve done everything from running open mics, to recording with big name producers. The only drawback to working in the music industry is the tired smelly rehearsal rooms you have to frequent.

It was Christmas 2018 we decided to do something about this. After a discussion about following your dreams we started a business plan to see if it would be a viable project. Things stepped up a notch in January 2019 when we found out the rehearsal room we relied on was closing. Our plan secured funding for the build and the race was on to find a suitable location.

At this time the news was filled with stories of businesses going bust because of Brexit. We thought it would be easy to find an industrial unit away from neighbours with enough room and easy parking but no. The high street may be dead but industry is booming. Having spent many days and nights driving around every industrial estate in a 30 mile range we eventually found our spot. An old bearing factory near Tedburn, Exeter.

With it being just an open plan space with no soundproofing we knew building work was necessary but we couldn’t afford to employ real builders. Thanks to the internet we found tutorials on everything from the strength of materials required to how to plaster. After watching many sometimes contradictory YouTube videos, we set to work. The floor plan was marked out with masking tape and the first batch of timber was delivered from a local sawmill.

Walls quickly went up. To keep things as isolated as possible each room has its own walls. No two walls ever touch. Each room also has its own ceiling not connected to any other. Every wall and ceiling has two layers of thick plasterboard to keep the sound in as well as enormous amounts of fluffy insulation in between.

The windows were boarded up as was one roller shutter door. Every crack and hole leading to the outside was filled. This did lead to one problem. How would you breathe? Baffle boxes had to be made to allow air to travel but not sound. These are connected to a quiet fan to move stale air out and draw fresh air into each room.

By now things were taking shape. We used a “real” electrician to make sure things were safe. He used all new wiring for each room, installed led lighting and new smoke detectors.

Each room was fitted with double fire doors to minimise sound leakage and paint went on.

It was starting to look like a studio now but more work had to go into making it sound good. Thick absorbers were made with Rockwool and cotton framed in wood and hung on the wall. These help stop the reflections we hear as slap back echo. Being thick they work on lower frequencies too. We are happy with the room sound now. It’s not too dead or too lively. Just about right.

16 channel looms were fitted in each room to allow use as a recording studio. The local band Haytor have already tried these out. We have a small control room almost ready for use.

The other thing we wanted was a space musicians could hang out away from the practice room. Luckily the unit came with a kitchen area where we have installed a fridge for cold drinks and a kettle for free tea and coffee.

Its been a hard few months but definitely worth the effort. We’ve already filmed a few videos in the large room that look great. The use of grey allows us to change the colour with light.

If you are looking for somewhere to rehearse or record a video in Exeter please get in touch. https://www.brazensound.studio/